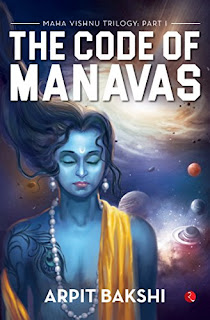 The Code of Manavas, is set some two million years past

ad 2050, when earth as we know it ceased to exist, and so did mankind. A new race, the Manavas, now exists on Bhoomi, the erstwhile Earth, which is divided into two cities—Madhavpur and Ayudhpur.

In the quiet and peaceful city of Madhavpur, a reclusive Krishna is busy with an immense task. He has to prepare a new abode for the Manavas before an impending apocalypse destroys them. He knows something that nobody else does—the Manavas are running out of time faster than they can imagine, and there are no inhabitable planets to escape to. To make matters worse, there is someone in Madhavpur who wants to destroy Krishna and subjugate each Manava. The Manavas, it seems, are doomed. Yet Krishna knows there is a slim chance of survival for the Manavas, although there is a huge price to be paid for it.