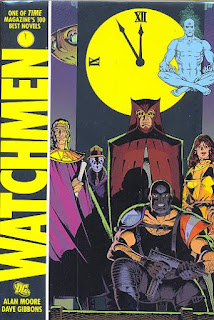 Watchmen is an American comic book maxiseries by the British creative team of writer Alan Moore, artist Dave Gibbons and colorist John Higgins. It was published monthly by DC Comics in 1986 and 1987 before being collected in a single-volume edition in 1987. Watchmen originated from a story proposal Moore submitted to DC featuring superhero characters that the company had acquired from Charlton Comics. As Moore's proposed story would have left many of the characters unusable for future stories, managing editor Dick Giordano convinced Moore to create original characters instead.